Robert John Hiemstra, Jr. (Bob) attended Lajes High School from September 1974 until November 1977. Bob graduated in 1980 and joined the Navy out of high school. He married Karen after basic training and served on the USS Independence when his son was born. Also while serving on the Indy, his lung collapsed and he was flown to Jacksonville, he was treated with HIV infected blood at that time (1983) and this was not discovered until he was serving in Spain. His wife died in 1995 from AIDS and he succumbed in 1996. He is survived by his son, Robert, his father and step-mother, Robert and Erselle Hiemstra, Sr., his mother and step-father, Lucy and David Baron, his sisters, Oleta Copsey-Caldwell and Debbie Copsey-Broadwater, three nieces and a nephew.
(Special thanks to Debbie Copsey-Broadwater for the article and photographs.)

On December 8, 1983, Bill passed away while in pilot training at Williams AFB. He was laid to rest in Las Vegas, NV. As a tribute to Bill, LHS has established the William W. May Memorial Award for the Most Outstanding Student.
(Special thanks to Cathy May-Gailey for the article and photographs.) 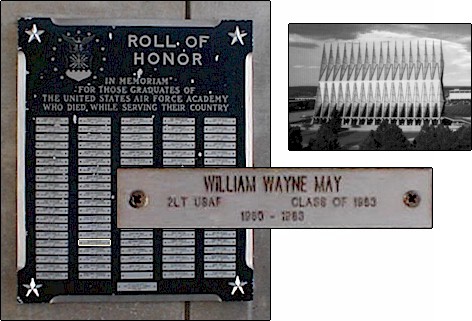 You'll forever be in our hearts and fondest memories.